The "Kurdish question" can't be understood ignoring the Armenian genocide

Not "only" a genocide to Armenians but also to Syriacs, Pontic Greeks and Kurdish Yezidin

The first definition of genocide was created by Raphael Lemkin and has been inspired by the extermination of the Armenians, Syriacs (also called Assyrians), Pontic Greeks and Kurds of Yezidin believe in the Ottoman Empire from 1912 to 1922.
Modifications have been made after the experience of the holocaust in the 3rd Reich.
Only one of many, but a sadly impressing evidence for how similar these two crimes against humanity were carried out, are the mass graves of about 40.000 Armenian and Syriac genocide victims surrounding the chapel of Margadeh in the Syrian desert Deir ez-Zor. 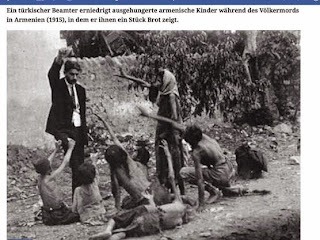 The photo was taken by the German eyewhitness of genocide, Armin T. Wegner
It shows an Ottoman state servant humiliating Armenian children being close to starve by presenting them a loaf of bread
Thanks to more than 400 internationally well-reputated historians it is now broadly understood that the Ottoman Empire's policy of monoethnisation fullfils all criteria of genocide.
Outside Turkey there are only about five historians denying this prooven fact by spreading some really strange conspiracy theories.
The European Union (Parliamentary Resolutions adopted in 1987, 1998, 2000, 2001, 2002, 2005) as well as 20 countries confirm the recognition.
Even Turkey's recently founded most democratic parties BDP and HDP recognize it and are persueing a policy of seriously meant reconciliation.


The uselessness of Turkey's proposal for an "international group of historians"

Turkish governments proposal for an "international group of historians" to examine the contents of it's state archives is completely useless, because historians already prooved that all criteria of genocide are fullfilled.
Furthermore this group would depend on the transcription from Arabic into Latin letters by Turkish civil servants. The Ottoman state archives had been written in Arabic letters.
It is worldwide standard that historians have to learn two of the following three languages, Latin, Ancient Greek and Sanskrit at university.
In addition, the results of analyzing numerous time whitnesses as well as German, American, French, Italian, Scandinavian and Russian state archives already lead to the conclusion that the Ottoman Empire clearly did genocide.
This is already scientific consensus. Only some governments and parliaments hesitate do accept this, because of NATO interallied policies.
Two years ago, Taner Akcam even found evidence in the obvioulsy not that well censored Turkish archives. They express clearly that the aim of the Ottoman policy of monoethnisation was to create a 90% Turkish population in each county. The other 10% were ought to be absorbed. While Kurds of Sunni and Alevi believe were considered to be absorbable before 1922, the Christians and Yezidin weren't. So, the result was that the Young Turks chargered a committee to process a plan for the extermination of these minorities. One of this plan's main architects was Baheddin Cakir, the Turkish equivalent to Adolf Eichmann in Nazi-Germany.


Suppression of the Kurds began shortly after the genocide

Futhermore, after all Christian minorities had been exterminated or expelled and disappropriated, the numerous massacres and suppression the Turkish state did to it's Kurdish population from the 1930s (Zilan) over Dersim (Turkish: Tunceli), Kahranmaras and Sivas to 2011 (Roboski), especially those of Alevi confession such as in the province of Dersim 1938 and 1939, when more than 30.000 Kurd civilians had been massacred, show a causal relationship with the not "only", as if it wouldn't be bad enough, Armenian (Armenian call it "Aghet") but also Syriac (call it "Sayfo) Pontic Greek and Kurdish Yezidin genocide.
Some historians even say that one reason for the massacres in Dersim carried out by the Turkish army, is the fact that Kurds there helped Armenian and Syriac refuges such as many Dutch people did with the Jews in 2nd World War.
Another historical fact in the same causal relationship are e.g. the mass killings of Jews in 1934, the Thrace pogroms.
Kurdish language and cultural customs had been forbidden in general for nearly 8 decades.
Before the so called "Turkish War of Independence" Mustafa Kemal promised autonomy to the Kurds in order to get them allied. Soon he broke his promise and continued where the Young Turks had been stopped at the end of World War 1.
Although some reforms have been executed to enhance the rights of the Kurds, in Turkey their language and culture is still not equal, but restricted by e.g. §222 of the Turkish penal code (Türk Ceza Kanun), and far away from fulfilling minority standards according to the International Covenant on Civil and Political Rights (ICCPR). 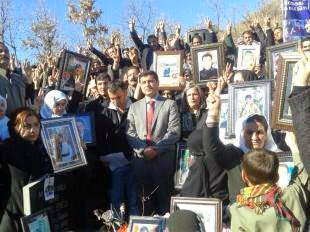 Kurdish civilians and BDP politicians commemorating the victims of Roboski airstrike, also known as the Uludere massacre
Turkish attempts to justify an ethnocentric policy and the resulting crimes against humanity are always the same, no matter if it is about the genocide to the Armenians, Syriacs, Pontic Greeks and Kurdish Yezidin or the massacres and suppression to the Kurds.
They consist of nothing but historical falsification, inaccurate stereotypes of strange conspiracies and racist criminalisation and defamation labelling four entire ethnical groups as aggressors, terrorists or even traitors to the nation ("vatan hayni"). Even in official Turkish educational books, Syriacs (also Assyrians) are still called traitors to nation.

So, if you want to understand the ‘Kurdish question’, you need to consider the genocide that the Ottoman Empire did to its Christian minorities, providing plenty of evidence of Turkey’s ongoing policy of monoethnisation and globally-unparalleled nationalism.


Doumanis, Nicholas: Before the Nation: Muslim-Christian Coexistence and its Destruction in Late-Ottoman Anatolia.

Kostos, Sofia Kontogeorge (Ed.): Before the Silence: Archival News Reports of the Christian Holocaust That Begs to be Remembered.

The Slow Disappearance of the Syriacs from Turkey: And of the Grounds of the Mor Gabriel Monastery.

Besikci, Ismail; Wir wollen frei und Kurden sein - Brief an die UNESCO (in German language "We want to be free and Kurds - letter to the UNESCO")